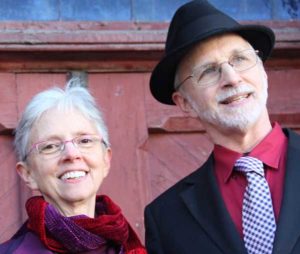 Steeped in traditional music and dance, Peter and Mary Alice have been a mainstay of choral singing at major traditional music festivals, choral singing weekends, and summer traditional music & dance camps for over twenty-five years. The Amidons were hired by Pete Seeger (“I have been singing Sacred Harp for 60 years and have never seen it led so well.” – Postcard from Pete Seeger after seeing Peter Amidon lead Sacred Harp singing at the the 1994 Old Songs Festival) to create and run a participatory singing stage for three years at Seeger’s Clearwater Festival.  Peter is Choir co-Director and Mary Alice a member of the Guilford (VT) Community Church UCC.  Mary Alice is a member of, and Peter is a founder and Music co-Director of Hallowell, an a cappella SATB hospice choir which has inspired, and often helped form, over one hundred other a cappella SATB hospice choirs. The Amidons’ choral arrangements and compositions are being sung by choirs throughout the United States and the UK.